“The Machine Stops” is a science fiction short story by E. M. Forster. After initial publication in The Oxford and Cambridge Review (November 1909), the story was republished in Forster’s The Eternal Moment and Other Stories in 1928. After being voted one of the best novellas up to 1965, it was included that same year in the populist anthology Modern Short Stories. In 1973 it was also included in The Science Fiction Hall of Fame, Volume Two.
END_OF_DOCUMENT_TOKEN_TO_BE_REPLACED

Many of Jules Verne’s novels deal with concepts that have become reality. “Paris in the Twentieth Century” is no exception exploring Paris in August 1960, 97 years in Verne’s future, where society places value only on business and technology. The novel follows a young man who struggles unsuccessfully to live in a technologically advanced, but culturally backwards world. Often referred to as Verne’s “lost novel”, the work paints a grim, dystopian view of a technological future civilization.
END_OF_DOCUMENT_TOKEN_TO_BE_REPLACED

Written by Jane Wells Web Loudon but published anonymously in 1827, the book gives an interesting look at the future. The story is of a mummy, Cheops, reanimated in the 22nd century, inspired by the exciting development of the era, and a positive look at the future.
END_OF_DOCUMENT_TOKEN_TO_BE_REPLACED

200 Years ago Mary Wollstonecraft (Godwin) Shelley created the story “Frankenstein, or the Modern Prometheus” on a rainy afternoon in Geneva. Mary and her husband, poet Percy Bysshe Shelley, were staying with their friend Lord Byron when he proposed they each write a ghost story. The first edition of the novel was published anonymously in London in 1818, when Mary was only 20 years old.

The basis of the story echoes Mary’s travels through Europe. Journeying down the River Rhine the Shelley’s stopped at Gernsheim, just 17 km from Frankenstein Castle. Two centuries earlier an alchemist engaged in experiments. Later, they traveled to Geneva—where much of the story takes place. During her travels her companions discussed galvanism and other medical advances of the day. Eventually, Mary dreamt about a scientist who created life using galvanism–the basis for her novel.

Although serving as the basis for the Western horror story and the inspiration for numerous movies in the 20th century, the book Frankenstein is much more than pop fiction. The story explores philosophical themes and challenges Romantic ideals about the beauty and goodness of nature.

The complete story can be found here. 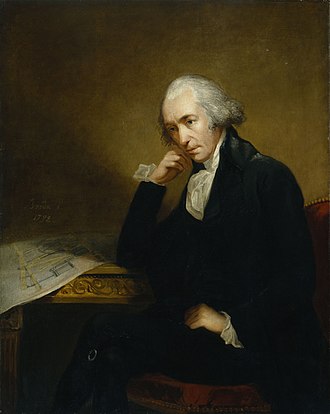 James Watt was a Scottish inventor, mechanical engineer, and chemist whose Watt steam engine, an improvement of the Newcomen steam engine, was fundamental to the changes brought by the Industrial Revolution in both his native Great Britain and the rest of the world.

While working as an instrument maker at the University of Glasgow, Watt became interested in the technology of steam engines. He realized that contemporary engine designs wasted a great deal of energy by repeatedly cooling and reheating the cylinder. Watt introduced a design enhancement, the separate condenser, which avoided this waste of energy and radically improved the power, efficiency, and cost-effectiveness of steam engines. Eventually he adapted his engine to produce rotary motion, greatly broadening its use beyond pumping water.
Watt attempted to commercialize his invention, but experienced great financial difficulties until he entered a partnership with Matthew Boulton in 1775. The new firm of Boulton and Watt was eventually highly successful and Watt became a wealthy man. In his retirement, Watt continued to develop new inventions though none was as significant as his steam engine work. He died in 1819 at the age of 83.

James Watt is the reason the industrial Revolution started in Britian

Steampunk is driven by a fascination with the height of the industrial revolution, when steam engines were the major driving force behind technological advances. But when did steam power first come about and how does it work?

Basically, a steam engine is an engine which uses steam to provide the force behind mechanical movement. When water is heated to the boiling point, it expands into steam. This expansion process creates energy which can be targetted into pistons, forcing the pistons to move. The expanded water (steam) is then siphoned off, cooled and returned to the boiler. As the steam is released from the piston, the piston contracts and prepares for another blast of steam.

The modern internal combustion (car) engine works in a similar way except–rather than external heating of the water to steam and funneling the pressure of the steam into a piston, the modern internal combustion engine fills the compressed piston with a flammable liquid. When the liquid (petrol or gasoline) is ignited, the resulting expansion of the liquid to gaseous state, forces the piston to move. The gas is then released as exhaust and the piston returns to a compressed state. There is a lot more to a car engine than this, but that’s the basics. The fuel for a car engine is burnt or expended to make the piston move, whereas the steam from a steam engine is converted back to water and can be used again.

From Wikipedia:
Steam engines are external combustion engines, where the working fluid is separate from the combustion products. Non-combustion heat sources such as solar power, nuclear power or geothermal energy may be used. The ideal thermodynamic cycle used to analyze this process is called the Rankine cycle. In the cycle, water is heated and transforms into steam within a boiler operating at a high pressure. When expanded through pistons or turbines, mechanical work is done. The reduced-pressure steam is then condensed and pumped back into the boiler.

In general usage, the term steam engine can refer to either the integrated steam plants (including boilers etc.) such as railway steam locomotives and portable engines, or may refer to the piston or turbine machinery alone, as in the beam engine and stationary steam engine. Specialized devices such as steam hammers and steam pile drivers are dependent on the steam pressure supplied from a separate boiler.

Using boiling water to produce mechanical motion goes back over 2000 years, but early devices were not practical. The Spanish inventor Jerónimo de Ayanz y Beaumont obtained the first patent for a steam engine in 1606. In 1698 Thomas Savery patented a steam pump that used steam in direct contact with the water being pumped. Savery’s steam pump used condensing steam to create a vacuum and draw water into a chamber, and then applied pressurized steam to further pump the water. Thomas Newcomen’s atmospheric engine was the first commercial true steam engine using a piston, and was used in 1712 for pumping in a mine.

In 1781 James Watt patented a steam engine that produced continuous rotary motion.[3] Watt’s ten-horsepower engines enabled a wide range of manufacturing machinery to be powered. The engines could be sited anywhere that water and coal or wood fuel could be obtained. By 1883, engines that could provide 10,000 hp had become feasible. The stationary steam engine was a key component of the Industrial Revolution, allowing factories to locate where water power was unavailable. The atmospheric engines of Newcomen and Watt were large compared to the amount of power they produced, but high pressure steam engines were light enough to be applied to vehicles such as traction engines and the railway locomotives.

Reciprocating piston type steam engines remained the dominant source of power until the early 20th century, when advances in the design of electric motors and internal combustion engines gradually resulted in the replacement of reciprocating (piston) steam engines in commercial usage, and the ascendancy of steam turbines in power generation. Considering that the great majority of worldwide electric generation is produced by turbine type steam engines, the “steam age” is continuing with energy levels far beyond those of the turn of the 19th century.

“Galvanism” is defined as the effect of the application of direct electric current to the body causing muscle contraction.  Scientist Luigi Galvani, was dissected frog in his laboratory while an electrical storm raged outside. When he touched the muscles of the frog with his brass scissors the muscles twitched. His notes postulate the lightning in the air exerted some influence over the frog’s nerves and muscles.

Later that year, during another frog dissecting experiment, his lab assistant touched the lumbar nerve with a scalpel causing the frog’s legs to twitch. There was no electrical storm, but there was an electrostatic generator on in the laboratory. Galvani started to experiment with the relationship between electricity and dead frogs’ leg movement. He postulated electrical energy was intrinsic to biological movement. The metal of the scissors and scalpel served as conductors providing a terminal for the static discharge, causing the muscles to move. Galvani felt electricity was the “vital force” of life.

In 1791 he published De viribus electricitatis in motu musculari commentarius, proclaiming to the world electricity was the force of life.

Introducing Dr Petra Sage, a galvanist, and Prof Erasmus Savant, her friend and fellow scientist. In this episode, a laboratory accident during a galvanization experiment will see our heroes embark on an adventure across the boundaries of space and time itself. Cast: Eddie Louise as Dr Sage Chip Michael as Professor Savant Justin Bremer as …

Introducing Dr Petra Sage, a galvanist, and Prof Erasmus Savant, her friend  and fellow scientist. In this episode, a laboratory accident during a galvanization experiment will see our heroes embark on an adventure across the boundaries of space and time itself.
END_OF_DOCUMENT_TOKEN_TO_BE_REPLACED

Episode 403: The Call is From Inside the House

Episode 401: Turtles All the Way Down

Episode 308:A Friend in Need

Episode 307: We Know Not What We May Become

Episode 306: These Things You Cannot Know

Episode 304: First We Practice To Deceive

Episode 208: A Most Shocking and Unnatural Event

Episode 207: Of Trainwrecks and Heartaches

Episode 204:
Dromedaries of the Old West

Episode 202: Amok in an Asylum

Episode 109: In Secret and Silence

Episode 105: Life Before the Mast

This website uses cookies to improve your experience while you navigate through the website. Out of these cookies, the cookies that are categorized as necessary are stored on your browser as they are essential for the working of basic functionalities of the website. We also use third-party cookies that help us analyze and understand how you use this website. These cookies will be stored in your browser only with your consent. You also have the option to opt-out of these cookies. But opting out of some of these cookies may have an effect on your browsing experience.
Necessary Always Enabled
Necessary cookies are absolutely essential for the website to function properly. This category only includes cookies that ensures basic functionalities and security features of the website. These cookies do not store any personal information.
Non-necessary
Any cookies that may not be particularly necessary for the website to function and is used specifically to collect user personal data via analytics, ads, other embedded contents are termed as non-necessary cookies. It is mandatory to procure user consent prior to running these cookies on your website.
SAVE & ACCEPT